Home » English » Where we are

To arrive at the hall:

1. From the Trent by-pass (la tangenziale), take the exit for the hospital. At the third roundabout, after the bridge over the stream, take the fourth exit for via Ghandi. This road becomes via Gramsci e curves to the right. Follow via Gramsci and at the second curve to the right there is a small street (on the left) that leads towards the hall.

2. From viale Verona, turn where there is the Pharmacy a bit to the south of the railway bridge over the road.

In any case, we ask that you do not park in front of the hall nor in the parking spaces of the apartments. There are instead a number of parking areas in the zone, that are indicated in red in this map: [click on the picture to enlarge it] 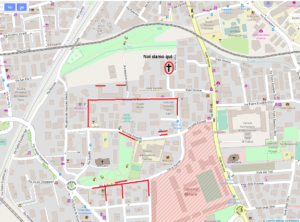 The bus routes A (station-Clarina), 3 (Gardolo-station-Villazzano) and 8 (Roncafort-station-Mattarello) stop at the intersection of viale Verona and via Einaudi. On week days, there is also the route 13 (station-Povo). Walk a bit north (towards the city centre) and turn left at the Pharmacy. Follow this street and after the curve towards the right, the hall is in front of our. This map has more details: 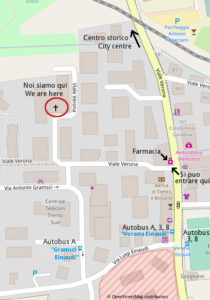 From the main train station of Trent, you need to take a bus, as explained about. Alternatively, you can take a train of the Valsugana line and get off at the station Santa Chiara. From there there is a 10-15 minute walk to the hall following this route: 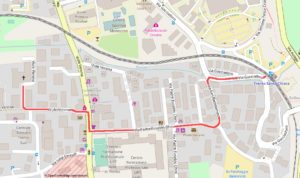 This website uses cookies to improve your experience while you navigate through the website. Out of these, the cookies that are categorized as necessary are stored on your browser as they are essential for the working of basic functionalities of the website. We also use third-party cookies that help us analyze and understand how you use this website. These cookies will be stored in your browser only with your consent. You also have the option to opt-out of these cookies. But opting out of some of these cookies may affect your browsing experience.
Necessario Sempre attivato

Any cookies that may not be particularly necessary for the website to function and is used specifically to collect user personal data via analytics, ads, other embedded contents are termed as non-necessary cookies. It is mandatory to procure user consent prior to running these cookies on your website.